£13 million to improve water quality of Wharfe in Ilkley 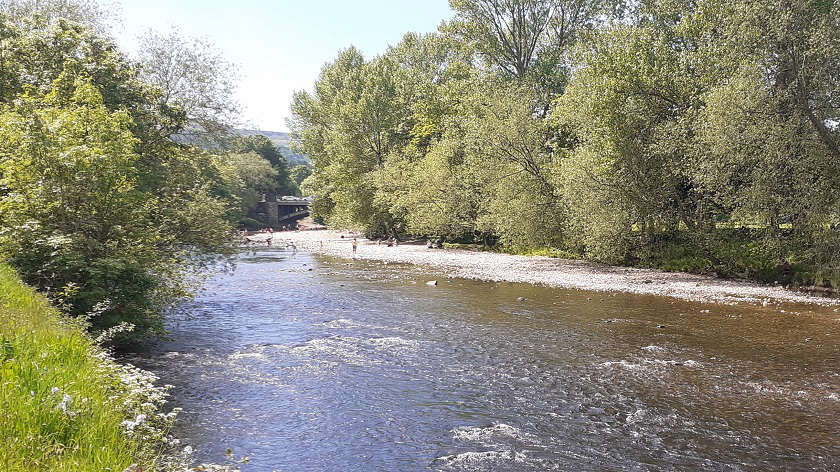 Ilkley campaigners have secured a £13 million investment by Yorkshire Water to clean up the pollution of the River Wharfe upstream of Ilkley.

The collaboration on citizen science testing by the Ilkley Clean River Group and iWharfe, alongside ongoing pressure from local people, shocked by the number of raw sewage discharges into the Wharfe, has demonstrated that in rain the river above the swing bridge is not fit for people and children to paddle, play and swim in.

It comes on the day that the Environment Agency (EA) testing shows the stretch of river in Ilkley is classified as Poor. Bathing waters are monitored for sources of pollution known to be a risk to bathers’ health, with up to 20 samples taken from each site during the bathing season. Each sample is tested for bacteria, specifically E coli and intestinal enterococci. It's the first year the river at Ilkley has been tested after being added to the list of bathing waters in 2021.

Yorkshire Water is committing up to £13m investment in a range of measures that aim to improve the Wharfe upstream of the bathing water. Enhanced disinfection measures will be applied to the final effluent returned to the environment at Grassington, Draughton and Beamsley treatment works, much like the measures taken on the coast, to reduce the impact on water quality.

Work will also be carried out to investigate misconnections in the catchment and a scheme to reroute the sewer network in some areas of Ilkley will be carried out to reduce discharges from storm overflows. A project is already underway to upgrade Rivadale combined sewer overflow (CSO) as part of this investment.

The Environment Agency (EA) classification at Ilkley relates only to the upstream stretch from the swing bridge and the investment announced will, over time, reduce pollution in rainfall in this stretch of river.

Whilst this attracts many visitors in the summer, Ilkley residents are really concerned about the 120 days, 1/3rd of the year when raw sewage is discharged into the river at Ashlands Sewage Treatment works downstream of this section; polluting the river for both local children who play at Beanlands, and visitors, but also impacting the who eco system of our river. We have been campaigning for a river fit for wildlife and people.

The Environment Testing downstream of the sewage works, at the Stepping Stones confirms the Ilkley Clean River Group testing that the river in this section is so polluted it is not fit for anyone to use the river on any day of the year no matter what the weather. It is a public health hazard.

Prof Peter Hammonds analysis of rivers across England reported by the BBC today shows that there were 93 illegal discharges from Ben Rhydding, Burley, Ilkley and Pool (those are raw sewage discharges in dry weather or when sewage should have been treated).

In a statement Ilkley Clean River Group said; "We have asked the Environment Agency to review the licence at Ilkley that allows the enormous amount of sewage discharges, double what should trigger an EA investigation, and which has been going on for the 3 years of our campaign.

"Whilst James Bevan the CEO of the EA promised quick action when we met him in 2019, so far there is no progress at the sewage works. So whilst we welcome the cleaning up of the Wharfe from Grassington to Ilkley, the main polluter of the river at Ilkley has been left out. In addition the work to stop the manholes popping sewage along the riverside footpath, is shunting the problem downstream to the sewage works.

"Yorkshire Water and the Environment Agency have known about the pollution from the sewage works now for at least the 3 years of our campaign and there is no progress. The welcome investment upstream must not detract from the urgent and necessary work that needs to happen in Ilkley to clean up our river so it is fit for people and wildlife."

Watch the report on Wednesday's BBC Look North below: