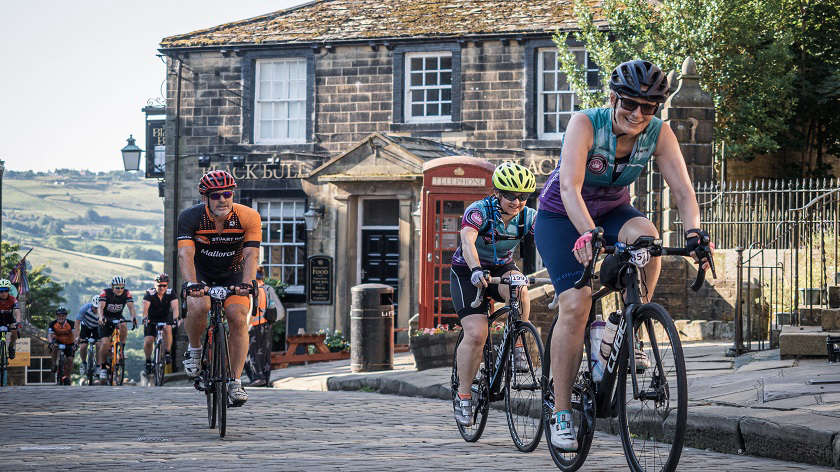 Participants will pass The Black Bull Inn in Haworth, famous for being frequented by Patrick Branwell Bronte

Yorkshire cyclists are invited to take on the Bronte Sportive 2022 this summer and raise vital funds for Sue Ryder Manorlands Hospice near Keighley.

Registration is now open for the 11th annual Bronte Sportive – and keen cyclists from all over the county are invited to saddle up and take on the challenge to raise money for Sue Ryder.

Taking place on Sunday 17 July 2022, the well-loved charity event will see participants cycle along a scenic Bronte-themed route of their choice. From keen cyclists to those seeking a new challenge, there’s something for riders of all abilities and fitness levels, with six routes varying in distance.

The Heathcliff route, which is recognised as being one of the toughest sportives in the UK alongside the Fred Whitton Challenge, is the longest at 93.1 miles. This is followed by Charlotte (74.5 miles), Emily (50.3 miles), Anne (29.2 miles), Branwell (23.7 miles) and Patrick (9.9 miles).

Starting and finishing at Keighley College, participants will get to whizz through the heart of the West Yorkshire Pennines, soaking up spectacular countryside views along the way.

Refreshment stops and water stations are located on each route, too, run by volunteers from the Queensbury Queens of the Mountain Women’s Cycling Club.

All cycling routes go through the famous Haworth Main Street and include the option of a timed hill climb challenge in tribute to Chris Mitchell, who received care from Sue Ryder Manorlands Hospice before he died in 2018.

His wife, Miki, who works in the hospice’s fundraising team, said: “Before he passed away, Chris suggested that I should join the Queensbury Queens cycling club to try something new and keep myself busy. I was convinced that I wouldn’t enjoy it, but I went along to give it a go and I’ve never looked back! The Bronte Sportive was one of the first cycling events I did with the group and the fact that it now pays tribute to him is truly special.

“We really are extremely grateful to all the cyclists and cycling groups who come along and take part in this iconic sportive. I hope that this year’s event will be just as successful as last year, if not more! The Bronte Sportive is a fantastic event with a really fun atmosphere and the money really does make a big difference.”

In 2021, the Bronte Sportive raised an incredible £19,000 for Sue Ryder Manorlands Hospice and this year it’s hoped that the fundraising efforts will top that – thanks in part to Sue Ryder’s long-term partner, All Terrain Cycles, who are sponsoring the event.

There is no obligation for participants to fundraise, but any money they do raise will help the hospice to continue providing expert palliative care, advice and support to people who are living with life-limiting conditions across Wharfedale, Airedale, Craven and parts of Bradford.

Those who do not live locally can also take part virtually, by completing their chosen distance anywhere in the world. All entrants will receive a finisher’s medal and the event will be followed by a BBQ.

For more information and to register for the Bronte Sportive 2022, visit: sueryder.org/sportive