The community comes together to support Ilkley Riverside project 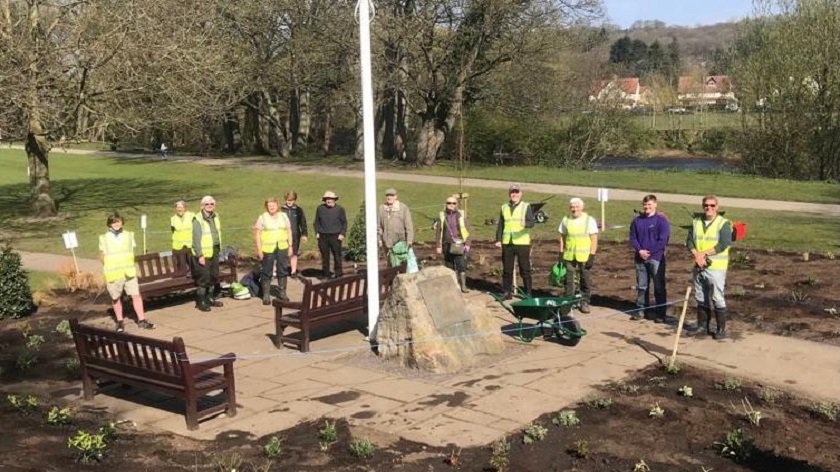 The Friends of Ilkley Riverside Parks (FOIRP) are pleased to announce the planned works around the Memorial area in Riverside Gardens have now been completed.

There are now flowerbeds overlooking Platform and the Bridge Street entrance with a wide variety of shrubs, perennials and ornamental grasses.

Ed Duguid, Chair of the Friends, said: “It’s been really hard work but we got there in the end. It was a real team effort and an example of different groups and organisations working together for the benefit of the community as a whole”.

FOIRP has been supported by a group of local Landscape Gardeners led by Hellen Taylor, all of who have donated their time and expertise for free. After several meetings the Gardeners group were able to scope out the area and have provided an exciting planting scheme.

The FOIRP volunteers cleared the turf and excavated the new beds before adding 14 tonnes of new topsoil to the new beds. “And when I say “excavated” I really mean it!” said Ed, “Some of the stones under the turf were enormous. However, we were able to hire some equipment from SHC Hire in Ilkley who charged us a special charitable rate. It was also the help of local builder, Joe Bonner that really made a big difference. He lent us a digger and small dumper truck. This made the back breaking work a bit easier. Local Topsoil firm, Greenlands, gave us a discount and finally Ilkley based mulch specialist, Strulch.com, gave as massive reduction in the price as we were a local charitable group (oh, and they enjoyed walking their dog in the park!).

“We had to purchase many of the plants ourselves. However, again a local beneficiary donated many of the plants and this made the variety more extensive and the overall cost manageable”. “Finally the |Landscape group spent all day planting out the plants, before the FOIRP volunteers returned again to complete the job by putting on the mulch, and of course watering most days in this hot weather, dragging the water from the river!”

All this has been made possible by the generosity of the local Co-op members, who nominated FOIRP as their local charity during 2020 and helped raise over £4000.

Ed added: “So this is a project which has very much been conceived, planned, designed, funded and supported by local people and local firms. “What a fantastic legacy from this year of pain for many, and where better to do it in the Park memorial area”

“Alan Titchmarsh, who started his Gardening Apprenticeship in Ilkley and is also a Patron of the Manor House, has agreed to officially open the new Flowerbeds later in the year. In honour of this the Group will be planting a Rose, named after him, Rosa Alan Titchmarsh, as part of the beds. “Let’s hope they are flowering by the time he gets here!”

The group have many other projects during the year as it continues its quest to improve the park areas, if you would like to help or support FOIRP please visit the website friends-of-ilkley-riverside-parks.com