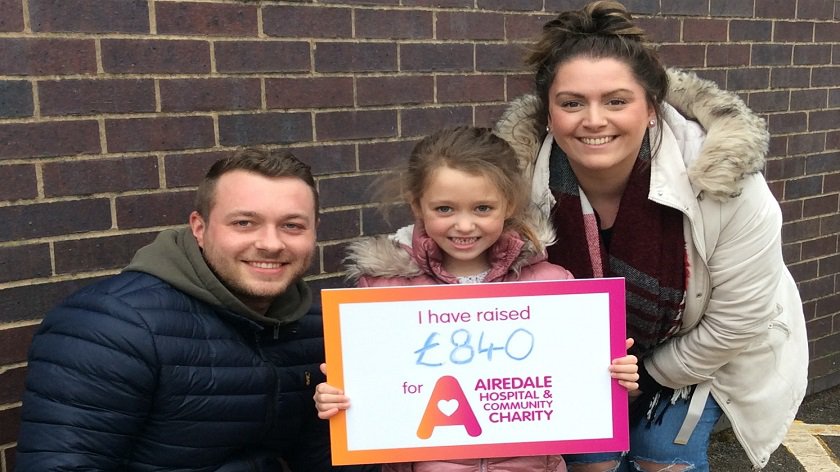 Emilia, who lives in Eastburn with mum Saraya and dad Sam, was taking part in the national clap to commemorate the life of Captain Tom when she told her mum that she wanted to do something to help.

Mum Saraya who also works as a Healthcare Support Worker at the hospital says: “We went out for the clap for Captain Tom and I explained to her before we went out why we were doing it.  When we came back in she asked what did he do.  I told her and she said ’that’s amazing, I want to do something like that to help the hospital with the bad bug’.  I told her she could do anything she wanted to do, thinking she’d want to do a bake sale, but she wanted to do litter picking.  She said she wanted to make the streets nice and clean for everybody.

It started from there and she was really keen for it, she was always wanting to go out and litter pick.  So I thought how we can get the fundraising and set up a page on Facebook and we are now at £840, we were only expecting about £60 and it has gone really well.

Her nana works at DHL and they are hoping to match the amount already raised.

Saraya continues: “Proud doesn’t even come close, we’re just so in awe of her.  She’s amazing and she’s got the biggest kindest heart.  She is always wanting to help other people.  She says she wants to be a nurse or a doctor when she’s older.  She wants to do anything for anyone and she doesn’t ever want anything in return.  For example there was a boy at school who she saw playing on his own so she went up to him and asked him if he wanted to play. She wants everyone to be happy; she is absolutely a little carer.  She’s amazing.”

Charity manager at Airedale Hospital & Community Charity, Jodie Hearnshaw, says: “I was delighted to meet Emilia and hear all about her fantastic fundraising for our hospital. She is an inspiration and full of energy, we are excited to let her know how the money she raised has helped. Emilia is a shining example of our younger generation who have so much potential to make a difference in the world, we are so proud.”