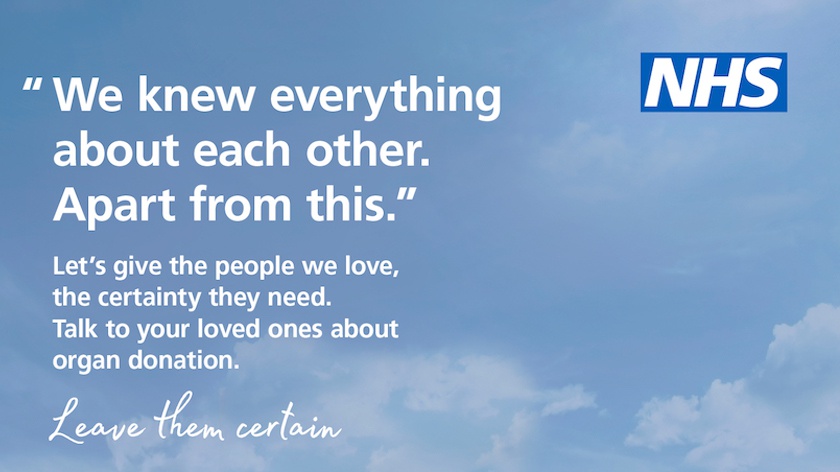 Health professionals across Airedale and Craven are backing a new campaign to encourage people to talk about what they want to happen to their organs after they die.

It comes as research shows fewer than half of adults in England have had a conversation with their families about the subject.

The law in England changed last year so that everyone is seen as willing to donate their organs - unless they opt out or are in one of the excluded groups (such as under 18s and those who've lived in the country under a year).

David Crampsey, Executive Medical Director said: “Talking to your loved ones about your organ donation decision is hugely important. The not knowing can be an added stress for your family at what is already a very difficult time. We would like to encourage more people to think about whether they’d like to be a donor and to let friends or family know so your decision is clear and they can have peace of mind knowing that your decision to be an organ donor is being honoured.”

Research shows that the biggest barrier to talking about organ donation is that it’s never come up in conversation with 34% of people stating this as their reason. 27% say they are worried it will upset their family or make them feel uncomfortable, 24% feel they don’t need to tell anyone their decision, 22% don’t want to talk about their own death, 22% say they haven’t got round to it yet and 16% have never thought about organ donation before.

As part of the national campaign, a new TV advert launched this week featuring the Kakkad family. Shivum’s father Bharat died from a cardiac arrest when he was 63 in May 2019, but the family had never spoken about organ donation. The advert features family footage and memories of Bharat but ends with another memory - when they asked Shivum if his father wanted to be an organ donor and he just didn’t know. Significantly, Shivum and his family did agree to organ donation, but it was a decision that could have been made easier if they’d had the conversation.

Shivum said: “My father was a very giving person. He did charity work and was a strong believer in the Hindu act of Sewa, of service to god. When the specialist nurse approached us about organ donation, we made our decision. We knew that helping others in need was what my father would have wanted. But I wish we had spoken about it to know for certain and I would urge others to take the opportunity while they still can.”

Shivum hopes that by sharing their family’s story, they will encourage more families, particularly from Asian and other ethnic backgrounds, to support and talk about organ donation. The numbers of donors are increasing, but more need to come forward as often the best transplant match will come from a donor of the same ethnicity. Bharat went on to help the lives of two other people. He donated a kidney to a woman in her 50s and a kidney to a man in his 60s.

Anthony Clarkson, Director of Organ and Tissue Donation and Transplantation for NHS Blood and Transplant, said: “People often tell us that they struggle to find the right time or words to talk about organ donation, unfortunately we see first-hand the impact not knowing has on families when the first time they consider their loved ones wishes around organ donation is when they are seriously ill or have already died. Talk to your friends, talk to your family. Even though the law has changed, you can still sign up to the NHS Organ Donor Register to provide your family with added reassurance. Please don’t wait. Have the conversation today.”

The NHS has some produced some tips and guidance to help start the conversation:

Find out more at organdonation.nhs.uk